WaterBrook’s NYT bestseller “Fearless” to be adapted to film 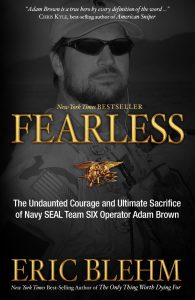 The film will tell the story of SEAL Team Six commando Adam Brown, a legendary hero who repeatedly overcame personal demons, including drug addiction and jail, to fulfill his childhood dream of becoming a member of the elite Navy SEAL team. Supported by his family and drawing on his faith, Brown’s story of perseverance, heroism, and sacrifice is an inspiring story of patriotism and selflessness.

“Eric Blehm’s bestselling book absolutely captivated me,” said Andrew Erwin. “Adam Brown’s journey from destructive addiction to the front lines with the Navy Seals is the most human redemption story I’ve ever read. Adam is a true American hero who overcame insurmountable odds to earn his way onto Seal Team Six, and the love story and the strong faith he had with his wife Kelley was truly special. We are tremendously honored to bring this story to life, and I can’t think of a better person to write this than Jason Hall. We are all honored by the trust the Brown family has placed in us to tell this story.”

Downes added: “This film is right in Andy’s wheelhouse. Fearless will not only take you behind enemy lines with SEAL Team Six, but into the heart and soul of one man and how he found the strength to step up. With its exciting setting among our country’s most valiant heroes and a story that delves deep into what it means to show true valor, Fearless will be a highly cinematic, compelling film.”

Added Kelley Brown, who was married to Adam Brown, “We are so blessed that such an amazing team will bring Adam’s story – as told in Fearless – to the big screen. His legacy is in good hands.”

Andrew Erwin and his brother Jon previously directed American Underdog, I Still Believe, and I Can Only Imagine, among others. Fearless is published by Penguin Random House.