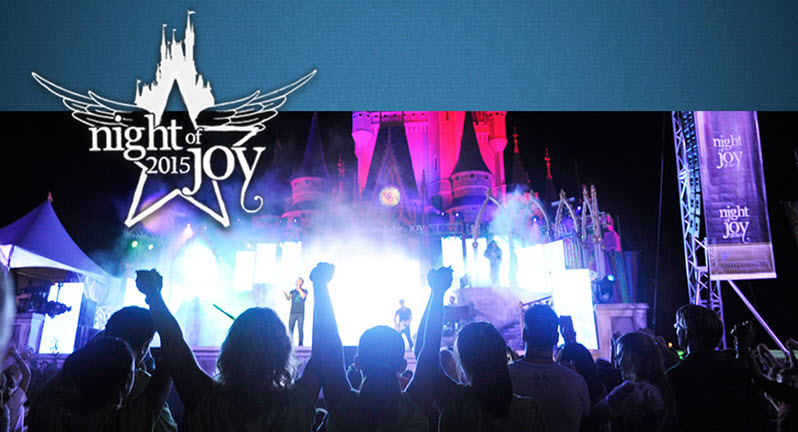 Music is a powerful way to create an association between a brand and an audience.   Nielsen’s research reaffirms this potential. According to its Music 360 report, 76% of festivalgoers say they feel more favorable toward brands that sponsor a tour or concert.  Approximately 74% of music streamers lean toward brands that engage them through music giveaways, sweepstakes, and sponsorships.

Brand sponsorships for music festivals, tours, and venues totaled 1.3 billion dollars in 2014 and are projected to increase over the next few years.

Disney’s Night of Joy is exactly the kind of premiere event that creates this level of brand connection for you within Christian market audience.

In 2014, Disney’s Night of Joy reached beyond the gates of the Magic Kingdom® to the rest of the world, using FrontGate partner Blue Scout Media’s platform, StageHop. Fans were able to watch all three stages live from their computers, smartTVs, and mobile devices, and interact via social media with other fans in and outside of the park.

..and here were the results:

What is our Special Offer?

New this year:  our Branded Social Media Widget (1 available) provides one sponsor with the highest social and visual engagement possible through this EXCLUSIVE placement, alongside traditional banners, logo placement and social posts.

For visuals of the StageHop webcast environment, demographics, geographics and much more, click to view our PDF of the media kit, or contact us through the web site, or ring us up at 949-429-1000 to discuss a campaign.  Sponsorship options are first come, first serve with limited availability. All sponsors must be pre-approved by Disney.