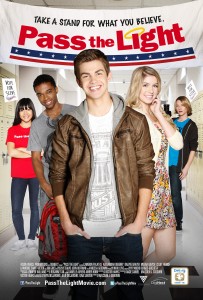 
CELEBRITY AND MEDIA ENDORSEMENTS ROLL IN TO SUPPORT PASS THE LIGHT

NEW YORK and LOS ANGELES – Vision Vehicle Productions, producers of “PASS THE LIGHT” opening in select Carmike Cinemas nationwide on Feb. 6, announced the launch of the campaign “See the Light” on crowd-funding platform Indiegogo.  The campaign hopes to bring the message that God’s love is for everyone to people who wouldn’t otherwise be able to see the faith-inspired film. The majority of funds raised from “See the Light” will go towards purchasing tickets and providing bussing to underfunded, and under-recognized communities who have embraced the inclusive nature of God’s love.

“I am devastated each time I hear someone use God’s name in hatred and exclusion,” explains writer Victor Hawks. “I was taught that we are all God’s children, and that is a core message of PASS THE LIGHT.”

PASS THE LIGHT follows 17 year-old student Steve Bellafiore on a transformative journey from shy, unassuming teen through a community-uniting run for a local Congressional seat. Disturbed by a competing candidate’s use of religion to foster hatred, intolerance and divisiveness, Steve seeks to unite his town with campaign messages of kindness, love and positivity.

The message of universal love has resonated with audiences across the country who watched the film during a multi-city screening tour. Celebrity friends and media gatekeepers are also weighing in:

“PASS THE LIGHT is one of those rare films that inspires and challenges its audience to be better. This is one of those amazing films that can actually affect change. I loved this beautiful film because it wears its heart on its sleeve. It is so beautiful and inspiring,” said 5-time Tony Award nominee Danny Burstein.

Matthew Morrison, star of the Emmy and Golden Globe award-winning FOX series “Glee,” states, “PASS THE LIGHT gives me hope that all of us, from every religion and walk of life, can come together with kindness, positivity and acceptance so we can tackle the bigger issues our entire community faces.”

The Dove Foundation recognized the film with the Ages 12+ Faith Friendly Seal of Approval.  Their review states, “This inspiring movie about loving people where they are carries a ‘love’ rather than ‘hate’ attitude that lifts the film to great heights.  It also makes crystal clear that young people can make a difference.”

Receiving a five star, editor’s choice review, Christian Review Magazine explains, “After watching PASS THE LIGHT and taking some time to think things through, I would have to predict that PASS THE LIGHT is going to be the must see movie of the year.  If I’m honest, it is one of the best Christian movies ever made.”

ChristianCinema.com says in their review: “Pass the Light challenges us to look beyond the question of how to define sin and ask the bigger question: How can I make a difference in the lives of people around me and show them the love of Christ through action?”

As stated on the See the Light Indiegogo page, the filmmakers were so saddened by recent teen suicides attributed to bullying and intolerance, that they were motivated to find additional ways to raise funds to bring the film’s message of kindness and acceptance to more people. By using PASS THE LIGHT as a catalyst for everyone – the bullies and the bullied – they hope to bring people together in kindness and respect.

“Independent filmmakers have limited resources. So we are asking that people who believe in our message to help us raise the funds to donate tickets to schools, charities, after-school programs and churches. We just want the opportunity to have our message heard,” said the film’s director, Malcolm J. Goodwin.

Carmike Cinemas has also announced a promotion for the film called “Pass a Coke”.  Any high school student who shows a valid high school ID along with their PASS THE LIGHT ticket stub will be able to receive a complimentary small Coca-Cola fountain drink.  This promotion will continue at Carmike Cinemas throughout the film’s theatrical engagement. PASS THE LIGHT opens on Feb. 6, 2015 in select Carmike Cinemas nationwide, and is distributed by DigiNext Films LLC. For more information on the film including theater locations and ticket sales please visit www.PasstheLightMovie.com