TYNDALE HOUSE NAMES
NEW PRESIDENT, CHAIRMAN OF THE BOARD 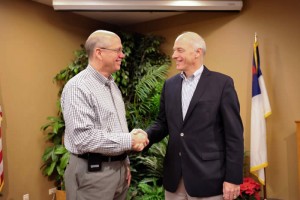 CAROL STREAM, ILL. (January 22, 2016) – The board of directors of Tyndale House Publishers has elected longtime president Mark Taylor to serve as chairman of the board and chief executive officer. The board also promoted Jeff Johnson to the role of president and chief operating officer. The transition in leadership follows the retirement of Charles W. (Chuck) Stair, who chaired his last meeting of the board of directors for Tyndale House in mid-December following a tenure of nearly forty years.

Mark Taylor has been working at Tyndale House since the company was founded in 1962. After graduating from Duke University in 1973, Taylor became executive director of Tyndale House Foundation. Over the next eleven years he moved through various administrative positions in the publishing company. In 1984 he succeeded his father, Dr. Kenneth Taylor, as President and CEO. By adding chairman to his CEO role, Taylor takes on the task of balancing the perspective of the board and that of the executive staff.

Jeff Johnson began at Tyndale as a stock runner in 1986. In 1988 he assumed the position of director of human resources and administrative services where he served for ten years. During that period Johnson oversaw three major building projects and coordinated the initiation of the 401(k) Plan to replace an earlier pension plan. In 1998 he was promoted to the role of vice president, Publishing Services. During the next six years Tyndale experienced phenomenal growth due to the success of the Left Behind series, which went on to sell over sixty million copies. Johnson was named chief operating officer in 2004. As COO, he was instrumental in the creation of Tyndale Espanol in 2005.

“This is a natural next step for Jeff,” commented former board chairman Chuck Stair. “The addition of ‘President’ to his title signifies both inside the company and to the entire industry the confidence we have in Jeff’s present and future leadership.”

Tyndale House Publishers, (www.tyndale.com), founded in 1962, is the world’s largest privately held Christian publisher of books, Bibles, and digital media. Tyndale has published many New York Timesbestsellers. The largest portion of its profit goes to the nonprofit Tyndale House Foundation, which makes grants to help meet the physical and spiritual needs of people around the world. Tyndale was founded to publish Living Letters, which later comprised part of The Living Bible, a contemporary paraphrase of the Bible that became a global publishing phenomenon. Tyndale now publishes the Holy Bible, New Living Translation (NLT), the translation of choice for millions of people.