Author, Screenwriter and Expert on the Age of Noah Partners with Movie To Movement and ChristianCinema.com to Take Questions About the Controversy Around Noah. 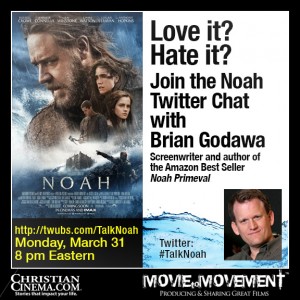 Los Angeles, CA – Christian Author, Screenwriter, and Script Doctor, Brian Godawa is no stranger to controversy.  As the author of the non-fiction book HOLLYWOOD WORLDVIEWS: Watching Films with Wisdom and Discernment, and of the Amazon bestselling Biblical fiction title NOAH PRIMEVAL, part of the CHRONICLES of the NEPHILIM series, Godawa has been a much sought after expert on the intersection of faith and film.

Godawa has partnered with Movie to Movement and ChristianCinema.com to present a lively and in-depth online discussion about the Paramount Pictures’ film, scripture and culture. Movie to Movement, the largest Christian entertainment engagement community, and ChristianCinema.com, the most visited movie website in the faith-based market, will present this definitive faith-based discussion regarding Noah on Monday, March 31 at 8:00pm EST, online at http://www.twubs.com/TalkNoah and on Twitter at #TalkNoah.

Combining his Hollywood experience with his extensive research on Noah as presented in Jewish & Christian historical writings, Godawa will take questions about NOAH in the context of both. Examples of questions include: Should Christian’s support films like Noah? How Biblical is this film?  Can Hollywood make Biblical films? How can we find out more about characters like the Watchers and the Nephilim?

During the chat, participants will be encouraged to tweet in questions and comments about the film NOAH with Godawa anticipating an engaging and lively discussion on faith, filmmaking, and this often misunderstood portion of scripture.  Topics will include amazing, lesser known facts about Noah and this time period, The Bible, Environmentalism, the persona of Noah and his wife and daughters, and how Christians can better discern the intent of filmmakers, be better informed on scripture, and articulately engage in pop culture.

A blog by Godawa in October 2012 critiquing an early script of the film has recently been quoted in outlets such as CNN, Hollywood Reporter and Good Morning America. These early insights have left an indelible impact on the topic of filmmaking, specifically when dealing with core issues and belief systems. Godawa believes it is the responsibility of both filmmakers and viewers to be respectful and sincere when engaging in culture.

Godawa’s book, HOLLYWOOD WORLDVIEWS: Watching Films with Wisdom and Discernment, has been widely used as a text-book in film programs at universities and high schools across the nation.  As stated in the book, he does not condone the idea that Christians boycott films – he wants Christians to engage in culture. He wants viewers to be able discern the intent of the filmmakers, as well as be informed about what the Bible says about films like NOAH.

Another Godawa title, NOAH PRIMEVAL has become an Amazon bestseller, painting the landscape of the story of Noah.  Due to the extensive research required to prepare for the novel, Godawa became an authority on the book of Genesis and often lectures and teaches on the ancient scriptures and writings regarding this period of time.  Godawa hopes this chat will help answer any questions viewers may have encountered after viewing the Aronofsky film when it opens this week, or as they consider seeing it in the future.

Bobby Downes from ChristianCinema.com explains, “Our mission is to provide a platform for Christian artists like Brian Godawa. This is an online discussion where Brian has graciously offered to share his knowledge of both the story of Noah and the craft of storytelling through movies.  This is truly a unique opportunity for anyone who is interested in history, scripture, culture or who is just a fan of films.  I know our audience will walk away informed and encouraged after this amazing event.”

“Most religious people see this film as an opportunity to engage with the culture around them and to talk about something that is normally suppressed or dismissed,” explains Godawa. “If you choose to see Noah, use this as an opportunity to express to those who have seen it what you thought of it and how your personal faith in the God of Noah has affected your life. Talk about your own interpretation of the Noah story in the Bible. Speak the truth in love. I plan to.”

To participate in the chat, please view on http://www.twubs.com/TalkNoah or simply follow on Twitter by using #TalkNoah.

About Movie to Movement
Movie to Movement™ was created to promote a culture of Life, Love & Beauty. They do this through the production of our own films, as well as sharing others. Movie to Movement believes that film is today’s most influential medium and that we can change culture, and use Hollywood to do it. By going to see Movie to Movement™ promoted and produced films we viewers are supporting good films and send a message to Hollywood that more need to be made. http://www.MovieToMovement.com

For more information or to schedule an interview with Brian Godawa please contact: