The Long Goodbye: The Kara Tippetts Story
to release on Netflix June 23 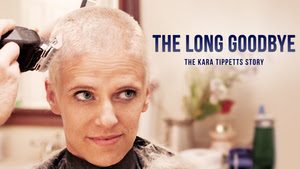 THE LONG GOODBYE: The Kara Tippetts Story – New documentary follows the powerful story of a wife and mother thrust into the national spotlight through a terminal cancer diagnosis.  KaraTippettsDocumentary.com

Film was a #1 best-seller on the Amazon Documentary chart and remained in the Top 10 for 6+ weeks.

Filmmakers Jay Lyons and Sofia J. Lyons are available for interviews to promote the launch of the film to Netflix.

Kara Tippetts, a wife and young mother with terminal breast cancer shares the raw edges of dying with grace, dignity, and a sense of humor. We follow along with this celebrated author and blogger as she navigates through many of our greatest fears – suffering and dying. As a happily married pastor’s wife with four wonderful kids, a terminal cancer diagnosis wasn’t the storybook ending she would have written. Kara helps us realize that time is precious, and through her incredible honesty and ever-present humor, she reminds us that life truly is a gift. Kara was the author of The Hardest Peace (winner of the 2015 ECPA Christian Book Award® in the Inspiration category) and blogged faithfully at mundanefaithfulness.com. Cancer was only part of Kara’s story. Her real fight was to live genuinely with joy while facing a crushing reality.

For more information, to receive a screener, or to schedule an interview, please contact:
Lori Heiselman, 714-553-5181, Lori@BiscuitMediaGroup.com