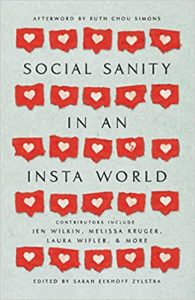 CHICAGO, IL, July 1, 2022:  US-based publishing ministry The Gospel Coalition (TGC) is delighted to announce the publication of a new multi-author title that encourages Christian women to apply grace and discernment to the way they engage online.

Social media can be both a delight and a disaster for women who want to love God and love neighbor. The industry has grown so fast that it’s been hard to figure out how to handle it wisely: in less than 20 years, about 80 percent of American women have signed up for an account. The latest surveys show Americans spend more than two hours a day scrolling, posting, and liking.

Featuring nine influential authors from various prominent ministries across the evangelical community, Social Sanity in an Insta World seeks to explore social media’s potential and pitfalls—along with the biblical principles we need to honor the Lord online.

To support the launch of this title, TGC is releasing a series of video interviews with the authors as part of a weekly book club, enabling churches to delve further into the principles behind the book and apply it in their local contexts.

Also releasing in July will be a special episode of Recorded—TGC’s investigative journalism podcast written by Sarah Eekhoff Zylstra—exploring the way social media is affecting the lives of Gen Z Christian women.

Find out more at www.socialsanitybook.com.