What Does It Mean to Be Chosen?: An Interactive Bible Study Guide

What Does It Mean to Be Chosen?: An Interactive Bible Study Guide by author, speaker Amanda Jenkins, American filmmaker Dallas Jenkins and Dr. Douglas S. Huffman is based on the groundbreaking television show The Chosen, which has received over 64 million views. Releasing Jan. 21, 2021 from David C Cook, this eight-week Bible study guide for individuals and small groups is designed to bring both the Old and New Testaments to life in a brand new way.

As an illustration of the truth of God’s Word and the identity principles laid out in Isaiah 43:1-21, fulfilled in Jesus, The Chosen TV series viewers are taken deeper with the characters and in their understanding of the Bible with What Does It Mean to Be Chosen?: An Interactive Study Guide. The guide not only works in tandem with each of the eight Season 1 episodes of The Chosen, but is also an in-depth study to discover more of Jesus through the culture in which He lived and those He knew and healed.

“Being chosen by Jesus has beautiful and far-reaching implications; although it says even more about the Chooser than the chooses,” says Amanda Jenkins. “We are loved because He’s love. We are saved because He’s merciful. We belong to the family of God because Jesus is our ticket in, making Isaiah 43 and all its perks as true for us today as it was for God’s chosen nation back then.

“The Chosen TV series isn’t the end game,” adds Dallas Jenkins, who created, directed and co-wrote The Chosen. “Ultimately, it’s a tool to revive the viewer’s passion for Jesus, but discipleship is the end game, and it’s why we put so much time, effort and prayer into this study guide.”

“Millions of people have watched and been impacted by The Chosen TV series, and we could not be more thrilled to partner with the Jenkinses to offer this incredible new resource to churches and individuals,” says Michael Covington, Vice President Publishing & Acquisitions. “Group leaders, Sunday school teachers and everyone who participates in this interactive study guide will find their faith enriched by the experience.” 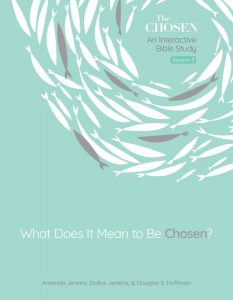 Along with contextual Scripture references, character scripts from the series, teaching and suggested discussion prompts, What Does It Mean to Be Chosen? will help readers understand the answer to that titular question. Being chosen means:

In addition to the study guide, also available are digital resources such as sermon outlines, video clips, customizable teacher/facilitator guides, recommendations for using in-person and virtually for both community and small groups, and promotional materials.

What Does It Mean to Be Chosen?: An Interactive Bible Study Guide will be available through www.thechosen.tv/store, from David C Cook and at retailers beginning January 21.

About The Chosen:  The Chosen is the first-ever, multi-season original series about the life of Christ from family-friendly streaming app and original content studio, VidAngel. Created, directed and co-written by American filmmaker Dallas Jenkins, the series is surpassing expectations and breaking records. Named the No. 1 crowdfunded media project in history, The Chosen went on to become the first entertainment project to be released around the world in more than 180 countries on its own app. It has also surged onto IMDb’s Top 250 All-time series list and has a 9.8 user score with over 9,800 user reviews, making it the highest rated Faith film project of all time. It further has a 100% critic score and 99% audience score (7,251 ratings) on Rotten Tomatoes.

Endorsed by Alex Kendrick, For KING & COUNTRY, Mandisa, Erwin Lutzer, Liz Curtis Higgs, Tim Tebow and many more, Season 1 of The Chosen has over 64 million views, is subtitled in over twenty languages and is available to watch for free on The Chosen mobile app. Viewers can cast the show’s episodes to popular streaming devices like Roku, Apple TV, Fire TV, Chromecast, etc.

For more information on The Chosen TV series, go to https://www.vidangel.com/show/the-chosen-a7284/season/1.

About Dallas Jenkins:  Dallas Jenkins, son of celebrated Left Behind author Jerry Jenkins, first produced the independent feature Hometown Legend at the age of 25 and shepherded it to distribution by Warner Brothers. In the nearly 20 years since then, he has directed and produced over a dozen feature and short films for companies such as Universal, Lionsgate, Pureflix, Hallmark Channel and Amazon. His most recent film, The Resurrection of Gavin Stone, released in theaters in 2017. He is now directing and producing the largest crowd-funded media project of all-time, a multi-season series about the life of Christ entitled The Chosen.

About Amanda Jenkins:  Amanda Jenkins is an author, speaker, mother of four and the lead creator for The Chosen’s extra content, including The Chosen devotionals, volumes I and II, The Chosen’s children’s book, The Chosen: Jesus Loves the Little Children, and the upcoming What Does It Mean to Be Chosen?: An Interactive Bible Study Guide. She has written six books, including Confessions of a Raging Perfectionist, a memoir that has inspired women’s Bible studies and conferences all over the country. She specializes in writing and teaching raw authenticity in our faith and lives just outside of Chicago with her children and husband, Dallas, creator of The Chosen.

About Douglas S. Huffman:  The official evangelical biblical consultant for The Chosen TV series, Douglas S. Huffman (Ph.D., Trinity Evangelical Divinity School) is Professor of New Testament and Associate Dean of Biblical and Theological Studies at Talbot School of Theology (Biola University) in California. Specializing in New Testament Greek, Luke–Acts, and Christian Thought, he is author of Verbal Aspect Theory and the Prohibitions in the Greek New Testament and The Handy Guide for New Testament Greek; and contributor to several theological journals and reference works. Dr. Huffman can be seen on The Chosen’s “Bible Roundtables” on The Chosen app.

About David C Cook:  David C Cook is a nonprofit organization dedicated to serving the global Church with life-transforming, Christ-centered materials. Headquartered in Colorado Springs, Colorado—with offices in Illinois, Ohio, Tennessee, and the United Kingdom—David C Cook produces resources that are published in over 150 languages and distributed in more than 170 countries. Originally founded in 1875 as a curriculum publisher, David C Cook now also publishes numerous bestselling books, resources, music (Integrity Music), and media from a variety of award-winning authors and artists. Learn more about David C Cook’s mission at DavidCCook.org.

What Does It Mean to Be Chosen? An Interactive Bible Study review and giveaway copies are available upon request. High-resolution cover artwork and other press materials are available now at https://app.box.com/v/ChosenBibleStudyPress.