JUNO Award Nominated Carse Returns to Canada to Perform at Upcoming “The Country Party – Once Upon A Time at the Bell Center” in Montreal. 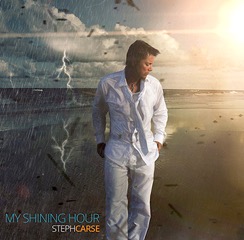 Nashville, TN – JUNO Nominated Male Vocalist of the Year, Steph Carse, is returning home to Canada to share his story, his passion to inspire an anti-bullying movement and to give a rare country-inspired live performance.

The Daystar Canada TV network will host the debut of Carse’s television special, “My Shining Hour,” in both one-hour and 30-minute versions.  The show premieres on Monday, June 12th at 9:00pm-10:00pm ET and will play in heavy rotation over the next 30 days broadcasting to 10.25 million homes.  Daystar Canada is also the exclusive destination to find Carse’s new “My Shining Hour” album, DVD and companion devotional.

On the self-produced program, Carse shares the experience of his music career, which has taken him from the top of the charts, to living out of his car, to the release of his new album “My Shining Hour.”  Told through music and narrative, Carse travels with viewers from Las Vegas to Africa, from Israel to his new home in Florida and beyond, sharing his journey of music, restoration, and his true calling.

Pioneered by FrontGate Media, this innovative content and product partnership between an artist and Daystar Canada is the first of its kind for the network. Through the show and on the Daystar Canada website (http://canada.daystar.com), fans can purchase a Personal Pack that includes the “My Shining Hour” CD, DVD and Devotional, as well as a Small Group Evangelism Pack that includes 5 of the Personal Packs at a special price.

On June 17, Carse will travel back to Montreal to perform as a special guest at “The Country Party – Once Upon A Time at the Bell Center.”  A themed party with capacity for 15,000 attendees, fans will experience an event that merges music and humor under the rich and colorful theme of country.  Carse will be performing several songs, including his new single “Awesome,” the theme song for the Y i Count anti-bullying campaign (http://www.yicount.org). Tickets to The Country Party can be purchased here: http://www.evenko.ca/fr/evenements/12352/p-a-methot/centre-bell/06-17-2017.

Carse, a native of Mascouche, Quebec, is excited to return to his roots. “I’ve been working for three years on the TV special and on new music, so it’s thrilling to be able to share both the “My Shining Hour” show and kick off our Y i Count campaign in Canada with so many who have supported me since the beginning.  I can’t wait to spend some quality time with great friends, family and fans.”

As a songwriter, performer and recording artist, Carse has sold over 500,000 albums worldwide and received a 5-star review for his 36-show run in Las Vegas from Jerry Fink of The Las Vegas Sun. Known for his impeccable 4-octave vocal range, his story was featured in the PBS Documentary “A Portrait of Steph Carse.”  In 1994, Carse was nominated for Male Vocalist of the Year in the JUNO Awards.  In 1998, Carse achieved another career milestone when he was chosen to participate in the opening ceremony for PortoFino Universal Studios Florida.  Backed by a 25-piece orchestra and choir, Steph performed at the ribbon cutting, which also featured the Mayor of PortoFino, Italy as an honored guest.

Dedicated to championing worthy causes, Carse co-wrote and performed the anthem “Reach Out,” the official song for The American Red Cross. He also wrote and performed the title track for the album “Holiday Heroes,” for The Special Olympics in Canada. The “Holiday Heroes” album generated over $2 million in net profit for The Special Olympics. Carse has now launched his non-profit Y i Count to provide a platform for this generation, and help them understand their true value and potential, the power of words, and to counteract the aftermath of bullying.

As a television producer, Carse won 5 awards from The Florida Motion Picture and Television Association, including Best Feature Film and Best Male Vocalist, for the one-hour TV special “Reach Out” that he produced for PBS.

“A truly talented performer with a distinctive voice style and the vocal range to master any work he performs,” – Diane Bliss of PBS.

“The singing sensation with Oscar-winning good looks and a voice to match.” – Jason Buchanan of The New York Times

Steph Carse is available for interviews. For more information or to schedule a time before or during the event, please contact: