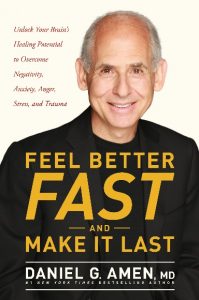 Amen, a popular psychiatrist and brain-imaging researcher and the founder of Amen Clinics, understands how critical it is to help patients feel better both quickly and long-term. Using the mnemonic BRAIN-XL, Amen demonstrates a specific plan for improving emotional health.

Amen writes that it’s normal to experience challenging emotions, but how people respond to these challenges will make all the difference in how they feel—not just immediately, but also in the long run. In our society, many turn to self-medicating behaviors, such as overeating, drugs, alcohol, or risky sexual behavior, while others spend excessive time on TV, video games, Internet surfing, or shopping. Even though these behaviors may provide temporary relief, they often prolong and exacerbate the problems—or cause other, more serious ones.

In Feel Better Fast and Make It Last, readers will discover new, powerful brain-based strategies to quickly gain control over negative emotions, strengthening resilience and discovering joy and purpose for a lifetime.

Amen states, “If you’re like me, when you hurt, you want to feel better now, fast, pronto! During my psychiatric training I had a wonderful supervisor, Dr. Jack McDermott, who was a world leader in psychiatry. In his evaluation of me at the end of the year he wrote, ‘Dr. Amen is a bright, competent, and caring physician, who will make a wonderful psychiatrist; but he needs to be more patient. He wants people to get better fast.’ Then and now, I don’t see wanting people to get better quickly as a problem. That is what people who are in pain want. No one wants to be patient. No one wants a prolonged process. They want to feel better fast, and they want that feeling to last.”

Regarding this acquisition, executive publisher Jan Long Harris states, “We’ve all felt anxious, sad, stressed, angry, or hopeless at some point in life. In this new book, Dr. Amen shares the latest brain-based strategies for gaining control over painful emotions and replacing them with sustained positive feelings. It’s a privilege to work with him to help get the word out that it’s possible to feel happier, more optimistic, more joyful and resilient—both now and in the future.”

The Washington Post has called Dr. Amen the most popular psychiatrist in America, and Sharecare named him the web’s #1 most influential expert and advocate on mental health. Dr. Amen is a physician, double board–certified psychiatrist, 10-time New York Times bestselling author, and international speaker. He is the founder of Amen Clinics in Costa Mesa, Encino, and San Francisco, California; Bellevue, Washington; Reston, Virginia; Atlanta, Georgia; New York, New York; and Chicago, Illinois. Amen Clinics have one of the highest published success rates treating complex psychiatric issues, and they have built the world’s largest database of functional brain scans, totaling more than 150,000 scans on patients from 120 countries.

Dr. Amen is the lead researcher on the world’s largest brain imaging and rehabilitation study of professional football players. His research has not only demonstrated high levels of brain damage in players but also shown the possibility of significant recovery for many with the principles that underlie his work.

Together with Pastor Rick Warren and Mark Hyman, MD, Dr. Amen is also one of the chief architects of Saddleback Church’s Daniel Plan, a program to get the world healthy through religious organizations.

Dr. Amen has written, produced, and hosted 12 popular shows about the brain on public television. He has appeared in movies, including After the Last Round and The Crash Reel, and in Emmy-winning television shows, such as The Truth about Drinking and The Dr. Oz Show. He was a consultant on the movie Concussion, starring Will Smith.