“Redeeming Love” helmed by D.J. Caruso to be released by Universal Pictures early 2022 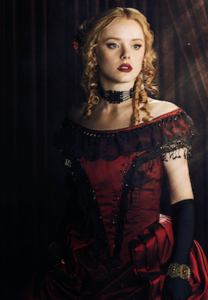 REDEEMING LOVE is a powerful and timeless love story that takes place against the backdrop of the California Gold Rush of 1850. The story centers on Angel (Cowen), who was sold into prostitution as a child. She has survived through hatred and self-loathing, until she meets Michael Hosea (Lewis) and discovers there is no brokenness that love can’t heal. The story reflects the redemptive power of unconditional and sacrificial love with characters and circumstances relevant to the contemporary world.

“Universal Pictures is a perfect home for our film,” said the film’s director D.J. Caruso. “They have a rich history in enabling films to find their core audience and beyond. I am excited for fans of the book and even for those who haven’t read it, that they will be able to experience Angel’s journey up on the big screen where it belongs. Every actor and crew member felt the significance of the story we were telling, and it enhanced and elevated the film in a profound way.”

The film is based on the novel Redeeming Love, which has remained on multiple fiction best-seller lists for over 15 years and has been published in more than 30 languages. Francine Rivers, the New York Times best-selling author of over 30 books, is thrilled to be one step closer to seeing this work come to fruition. “After many years of dreaming about this, followed by years of work alongside D.J., we can’t wait to see the story come to the big screen next year.”

In the lead role of “Angel” is the multi-talented actress Abigail Cowen. One of Hollywood’s rising stars, Cowen headlined the Netflix original series Fate: The Winx Saga. The actress has also appeared in I STILL BELIEVE, Stranger Things, The Red Band Society, Wisdom of the Crowd and The Fosters. Her breakthrough role was as Dorcas in The Chilling Adventures of Sabrina on Netflix.

Nthibah Pictures and Pinnacle Peak was represented by Tom Ara and Katherine Imp of DLA Piper.