Sharing Stories from His Turbulent Youth, Getting His Start in the Music Industry, and the Unshakeable Hope that Kept Him Going 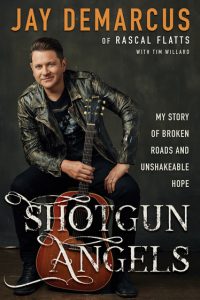 Grand Rapids, Mich., April 26, 2019— Jay DeMarcus, founding member of the superstar vocal group Rascal Flatts, gives fans a glimpse into the creation of the band and shares a message of hope instilled in him at a young age by his mother. Available April 30, Shotgun Angels: My Story of Broken Roads and Unshakeable Hope, sees DeMarcus reflect on being raised in a blue-collar family, his start in the music industry and why he almost walked away before Rascal Flatts was even formed.

DeMarcus will launch the book with major national media in New York City, Nashville and Columbus, OH, next week including, an exclusive TODAY Show interview on Monday April 29, and on FOX & Friends on Tuesday April 30. Additional appearances include FOX News Radio and Sirius XM’s The Highway.

Jay DeMarcus is bassist, vocalist, pianist, producer and songwriter for the most awarded country group of the past decade, Rascal Flatts and is a GRAMMY Award-winning producer.

For interview requests, reach out to Robin Barnett at robin.barnett@harpercollins.com or (616) 698-2351.