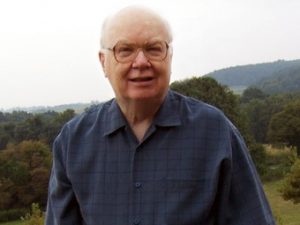 William James Petersen died of COVID January 31, 2021, at his home in Colorado Springs, CO. He was 91. He is survived by sons Ken and Randy, daughter Kathryn, son-in-law Christopher Colucci, and daughter-in-law Rita Dotson.

Born August 19, 1929, Bill Petersen grew up in the western suburbs of Chicago during the Depression. Church was always an important part of his life, from a young age. So was music. As a teenager, he often carried his baritone horn on the train into the city to play for a Christian youth program.

He studied journalism at Wheaton College of Illinois, graduating in 1950. There he met the love of his life, Ardythe Ekdahl. They married in 1952. Bill’s career in writing and editing began at a U.S. Army camp in Wisconsin and continued at Christian Life magazine. In 1957, he moved his young family east, working for three decades at Eternity magazine in Philadelphia, eventually becoming editor of the magazine and executive director of Evangelical Ministries, Inc. Later he became editorial director and vice president at Revell publishing. Along the way he wrote dozens of books, beginning with the missionary biography Another Hand on Mine (1967) and continuing with works on travel, marriage, history, and hymns. In his eighties, he ventured into fiction for the first time, self-publishing a trilogy of mystery novels about the Octogenarian Sleuth.

Bill loved to travel— loved the challenge of getting lost and finding new ways to return. He took his young family on many camping trips throughout the U.S. And he led tour groups through Europe and the Holy Land, sponsored by Eternity magazine.

He was uniquely talented as a Bible teacher, church leader, and—perhaps most of all—songleader. Long before worship bands were electrifying modern church services, Bill Petersen could stir a congregation to sing great hymns or gospel choruses with full hearts and voices. Yet what many will remember most about him is his ability to listen to them. He was genuinely curious about people’s stories, asking insightful questions and drinking in their responses. He made everyone feel important because, to him, they were.