“If I could, I would put this book into the hands of every Christian in America.”
—Dr. David Jeremiah 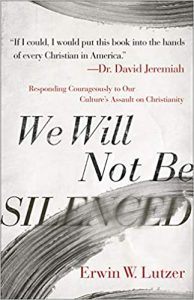 EUGENE, Ore. (October 19, 2020) – Every day, it seems American society is falling further away from Christian values and common decency and Christians are left unsure of how to respond. In his latest book, We Will Not Be Silenced: Responding Courageously to Our Culture’s Assault on Christianity (Harvest House Publishers, October 2020), Dr. Erwin W. Lutzer equips readers with the truth of Scripture to help live out their convictions against a growing tide of hostility.

“This book examines every cultural issue we are facing,” writes pastor David Jeremiah in the foreword of Lutzer’s new book. “Nothing is left out. It addresses diversity issues, racial issues, gender issues, social justice issues, media issues, issues of free speech, and issues rooted in socialism and Marxism. Most importantly, it covers issues related to the church and how it is responding to all of this.”

We Will Not Be Silenced arms believers with a deeper understanding of the hurts and concerns of nonbelievers with regard to social issues so the church is able to respond in a compassionate and gentle manner without affirming their secular beliefs. Lutzer longs to see Christians unashamedly uphold biblical values and the core principles of liberty in a way that responds effectively to a culture lost in spiritual darkness.

In a time where the truth of the Bible is under siege, Lutzer is providing a valuable resource to restore the church to its rightful place in the world.

“What a special privilege it is to be called to represent Christ at this pivotal moment of history,” Lutzer writes. “We are called for such a time as this. And we must pray that our light might shine more brightly than ever in our darkening world.”

About the Author:
Erwin W. Lutzer is the Pastor Emeritus of The Moody Church, where he served as the senior pastor for 36 years. A graduate of Dallas Theological Seminary and Loyola University, he is the author of numerous books, including the Gold Medallion Award winner Hitler’s Cross and the best-seller One Minute After You Die. He is also a teacher on radio programs heard on more than 700 stations throughout the United States and the world, including Songs in the Night, The Moody Church Hour, and the daily feature Running to Win. He and his wife, Rebecca, live in the Chicago area and have three married children and eight grandchildren.

About the Publisher:
Harvest House, a Christian publishing company based in Eugene, Oregon, publishes more than 100 books per year and carries a strong backlist offering more than 1,300 titles. Over 140 million Harvest House books have been sold worldwide through diverse distribution channels, and additional millions have sold in over 75 different languages.