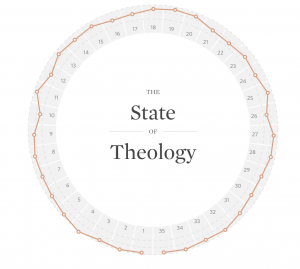 Today, many U.S. adults assume that all truth is relative. Nearly half of the respondents (48 percent) to the State of Theology survey reject the literal truth of the Bible. Even more respondents (54 percent) say that religious belief is a matter of personal opinion, not objective reality. The latter response is slightly better than in 2018. Although we do not know why that is, it may be that our chaotic cultural moment has prompted more people to turn to religion for objective truth.

While evangelicals have historically affirmed the authority of the Bible and salvation by Jesus Christ, trends in the State of Theology survey reveal that many American evangelicals express erroneous views that mirror the broader U.S. population. Now, 30 percent of evangelicals deny the deity of Jesus Christ (compared to 52 percent of the general U.S. population), believing instead that He was merely a good teacher. In addition, 65 percent of evangelicals agree with the heretical statement, “Jesus is the first and greatest being created by God.” The confusion illustrated in these results suggests a dire need for Christians to be taught Christology, the doctrine of the person and work of Jesus Christ.

The 2020 survey also shows a decline in the number of professing evangelicals who have an accurate understanding of salvation. Only 57 percent of American evangelicals hold to the Bible’s teaching that the Holy Spirit gives a spiritual new birth before a person has faith in Jesus Christ, compared with 63 percent in 2018. While the Bible teaches that God decided who would be saved before He created the world, only 38 percent of evangelicals agree with this doctrine (compared to 26 percent of U.S. adults).

With the rising acceptance of relative truth in every sphere of life in the United States, the ethical issues at the forefront of public debate continue to be clouded. In 2020, a large majority (73 percent) of U.S. evangelicals reject the arguments of “gender fluidity.” Yet it remains concerning that one in five evangelicals (22 percent) still appears to reject the Bible’s teaching that our gender as male and female is given by God our Creator.

“The 2020 State of Theology survey uncovers widespread confusion in the United States about the Bible’s teaching and the reality of who God is. Many have observed the drift among Americans toward relativism, and this survey helps to quantify how this nation is abandoning objective truth altogether. Sadly, just when the church needs to be clear and bold about our triune God, the Scriptures, sin, and salvation, many evangelicals are evidently being influenced more by this cultural drift than by the Word of God. Christians have an opportunity to bring light and comfort to our troubled times by pointing to Jesus Christ and the authority and sufficiency of the Bible. These survey results reveal that there is much work to do. Let us pray for an awakening to our holy God and to what He has revealed about Himself and how we are to live in this world.”

This year, anyone can take the survey for themselves at TheStateofTheology.com, and the website also features the new option to create private group surveys for use by churches, Bible studies, groups of friends, and more. All are encouraged to participate in these secure, anonymous surveys in order to help them facilitate discussion and better understand the beliefs of people in their communities.

LifeWay Research surveyed a nationally representative sample of 3,002 adults in the United States, including 630 professing evangelicals. The survey was carried out from March 10 to 18, 2020. More information can be found at TheStateofTheology.com.

Evangelicals were defined by LifeWay Research as people who strongly agreed with the following four statements:

About Ligonier Ministries:  Ligonier Ministries exists to proclaim, teach, and defend the holiness of God in all its fullness to as many people as possible. To that end, Ligonier’s outreach today is manifold and worldwide. Founded by Dr. R.C. Sproul in 1971, Ligonier’s teaching fellowship consists of theologians, pastors, and scholars. Ligonier publishes Renewing Your Mind broadcasts, the Reformation Study Bible, Tabletalk magazine, books through Reformation Trust, and hundreds of teaching series. The ministry also offers an undergraduate degree program through Reformation Bible College. In addition, Ligonier hosts national and regional conferences, provides an online learning community through Ligonier Connect, streams 24-hour Christian Internet radio through RefNet, answers biblical and theological questions with Ask Ligonier, pursues numerous translation efforts in other countries, and makes available thousands of unique educational resources online at Ligonier.org.