Dungy will sign books in New Jersey, Indiana, and Florida during his two-week tour 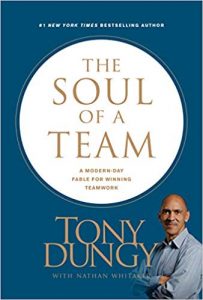 CAROL STREAM, ILL. – Tyndale House Publishers (@tyndalehouse) has announced that Tony Dungy, Pro Football Hall of Fame coach, football commentator, and #1 New York Times bestselling author, will kick off a national tour on Tuesday, January 22, to promote his new book, The Soul of a Team, which he wrote with Nathan Whitaker. The Soul of a Team (Tyndale House Publishers, $26.99, hardcover, 978-1-4964-1376-5) is Dungy’s seventeenth book, which includes ten children’s books he co-authored with his wife, Lauren. In addition to eight book signings, Dungy is scheduled to make national media appearances on NBC’s Today and FOX News’s The Story with Martha MacCallum, among others.

As a former Super Bowl–winning coach, Dungy is an expert at building and bringing out the best in a team. Drawing on his experiences from years of coaching and working with other leaders, this football fable lays out four essential principles practiced by truly effective teams. Telling the story of a fictional NFL team looking for a turnaround, The Soul of a Team not only identifies some of the most common issues that hold a team back but also lays out a game plan for winning teamwork. Tony’s principles can be applied to any team, whether it relates to business, sports, or families. The book includes a bonus group-discussion guide.

The book-signing schedule is as follows:

Tony Dungy is a #1 New York Times bestselling author whose books include Quiet Strength, Uncommon, The Mentor Leader, and Uncommon Marriage, the last of which he wrote with his wife, Lauren. He has also written ten children’s books with Lauren as well. He led the Indianapolis Colts to Super Bowl victory on February 4, 2007—the first such win for an African American head coach. Dungy established another NFL record by becoming the first head coach to lead his teams to the playoffs for ten consecutive years. He joined the Colts in 2002 after serving as the most successful head coach in Tampa Bay Buccaneers history. Dungy has also held a number of assistant coaching positions. Before becoming a coach, he played three seasons in the NFL. He was inducted into the Pro Football Hall of Fame in 2016. Dungy retired from coaching in 2009 and now serves as a studio analyst for NBC’s Football Night in America. Tony and Lauren are the parents of ten children.