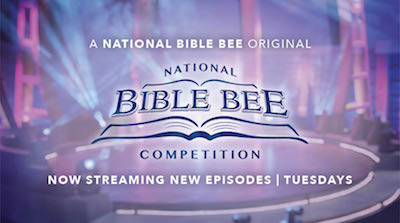 Now, one year later, the National Bible Bee Competition Show, will premiere April 24th at 8 pm Eastern on Facebook Live. Forty-five young people ranging from 7 to 18 years of age will compete for $100,000 in prize money in these six fast-paced weekly episodes.

The contestants for the National Bible Bee Competition Show are chosen from the annual National Bible Bee Summer Study in 3 age divisions: Primary (ages 7-10), Junior (ages 11-14) and Senior (ages 15-18). The top 120 contestants in each division compete nationally in Scripture knowledge and memorization. In preparation, young people commit to memory up to 950 Bible verses.

Emeal Zwayne, the national spokesperson for the National Bible Bee, says, “The National Bible Bee Competition is a culmination of not only months of study and memorization, but also prayer and dedication. We have been blessed beyond measure to watch these young people recite Scripture.”

Real estate entrepreneurs, authors and speakers, Jason and David Benham, are no strangers to television. Their show on HGTV was cancelled due to the stand they took for their faith.  “Watching these young people stand and recite Scripture from memory is incredible,” says David Benham.  Jason quickly added, “And to do it with that level of boldness and confidence is truly inspiring.”

Hannah Leary, of Buffalo, NY, says the competition is far more than rote memorization. “It’s not just memorizing Scripture,” Leary explained. “It’s studying Scripture and being able to dive in deep and understand what God has to say in His Word.” She adds, “All contestants know that the real prize of the National Bible Bee is the Word of God.”

ABOUT NATIONAL BIBLE BEE
The vision of the National Bible Bee (www.biblebee.org) is to “know God’s Word and make Him known” by engaging young people in the study and memorization of Scripture and the proclamation of His Word through local, national and broadcast competitions.