Millions Rally Across Social Media, Traditional Media and
in their Communities for Azusa Now 2016

Live Stream to be Broadcast in English, Spanish, Korean, Chinese and Portuguese 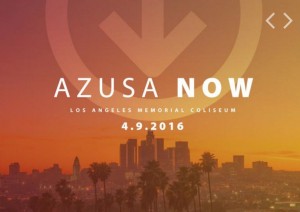 Pasadena, CA – Azusa Now is seeing the fruit of their call to prayer and unity across many diverse Christian denominations and ethnic communities, who will join together at the Los Angeles Memorial Coliseum on April 9, 2016. The Faith-based community has united in record numbers through social and traditional media to give exceptional event exposure that will create a positive major impact on Los Angeles as a whole.

Registrations are well on their way to a 100,000+ capacity audience, with the Azusa Now team having laid plans in place for overflow. The last time the Los Angeles Coliseum was filled to over capacity was the Billy Graham Crusade on September 8, 1963 with a record attendance of 134,256.

FrontGate Media, who is overseeing public relations and media for the event, implemented a Thunderclap crowdspeaking campaign for Azusa Now that brought people together with a single message to be mass-shared, flash mob-style, at the same moment.  The campaign achieved a total social reach of more than 1,115,000 people through Facebook, Twitter, and Tumblr.

Denominational and racial boundaries have been broken across Catholic and Protestant churches, as well as African-American, Asian, Hispanic, and Caucasian populations who are all coming together for this event.

According to Rt. Rev. Alexei Smith, “As the Ecumenical and Interreligious Officer of the Archdiocese of Los Angeles, it will be my great pleasure to participate in the Azusa Now summons to prayer, fasting and repentance. During this Year of Mercy, Pope Francis has asked us to be ‘Credible Witnesses of Mercy.’ Our participation in Azusa Now is a marvelous way of endorsing Pope Francis’ thoughts and words.”

Azusa Now will be seen by millions around the world as it will be broadcast live in its entirety by GOD TV with additional live and rebroadcast coverage provided by TBN, Juce TV and Daystar.

Azusa Now will be live streamed via the internet at AzusaNow2016.com in five languages: English, Spanish, Korean, Chinese and Portuguese.

In answer to the Azusa Now call for prayer and unity, many events have been created where church and local leaders are bringing together their faith-based communities. These range from individual church gatherings to participation via the live stream to additional large gatherings such as United Cry in Washington D.C.

Azusa Now has a number of pre-event activities this week leading up to the event, including the compassion initiative Carry The Love: L.A. where YWAM, one of the largest youth organizations in the world, has joined with Bethel Church from Redding, California for 10 days of turning Love into action.  Carry The Love: L.A. has created local activities that include one-on-one prayer with people in high-traffic areas, revitalizing outdoor spaces in public housing developments, community BBQs, music festivals in city parks and after-school events in public high schools.

Volunteers are still needed.  Several thousand volunteers have come forth from various churches and organizations, however there are many more critical volunteer opportunities available and needed.

Those wanting to volunteer, participate in the event, or be part of the pre-event activities should visit the website at www.AzusaNow2016.com.