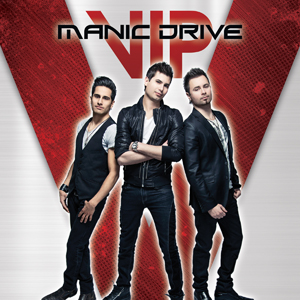 Newly independent, Manic Drive takes their career in their own hands
while retaining their belief in the power of music.

Toronto, ONT – For fans of the Toronto-based MANIC DRIVE, it has been a long three-year wait since their acclaimed studio project, EPIC.  Over the past decade, this award-winning trio has built a loyal international following, fostered by their infectious brand of power-pop and a genuine commitment to a relationship with their audience. Now, on October 14, a new season begins with the debut of their fifth studio album, VIP.

Two years ago, brothers Shawn and Michael Cavallo and longtime band mate Anthony Moreino decided to take their career into their own hands, choosing the path of independent artists.  This freedom has provided incredible opportunities as well as the privilege of creating music on their own terms and their own timeline.

Realizing the challenges that arise when artists step out of the label system, Manic Drive was motivated by a new level of commitment to their ministry. They began investing in their own recording studio, continued a near constant tour schedule, and sought out community with other like-minded artists and producers.

This underdog status appears to have only strengthened the band, as they became exceptionally focused and channeled their energies into the things that matter most: creating the best possible quality album possible, building a community within their Maniac fan base, and retaining the ministry that defines the roots of Manic Drive.

Title single “VIP” has been immediately added by radio network Air 1 and stations across the country.  The song shares the vision and hope of the band: a hope that listeners will know their worth.  Despite the song’s party-esque atmosphere and title, the song has little to due with the modern idea of celebrity.  Shawn explains, “So often we compare ourselves to others and forget who we are in Christ.  God gives everyone a purpose. “VIP” is a song that focuses on what we are uniquely called to do. The song is meant to celebrate who we are in Christ individually.”

Produced by Oh, Hush! (Cee Lo, Jamie Grace) and Nick Baumhardt (Stellar Kart, Britt Nicole), the band enlisted vocal collaborations with Manwell (of Group 1 Crew) on the title track, as well as fellow Canadian Trevor McNevan from Thousand Foot Crutch on the song “Electric.”  Recorded in Chicago, Nashville and their own studio in Toronto, VIP is filled with infectious power-pop melodies and lyrics rooted in truth, hope and encouragement.

Now in the midst of a Pledge Drive campaign, the band has already achieved 66% of their goal.  Fans, known as Maniacs, have always had an influence on the messaging and music of the band, so many of the Pledge Music offerings match their commitment to their fans – including handwritten and signed lyric sheets, concert experiences and even Skype calls with the band. Also included are more typical offerings such as music, video access and merchandise.

“Since the beginning, our fans have been the driving force behind the band,” continues Shawn. “Pledge allows us to give back to the Maniacs, and we’ve been honored by the support that VIP has already received.”