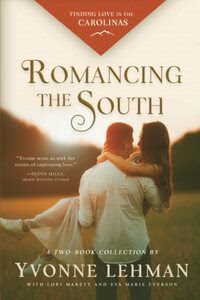 In Somewhere a Rainbow, Brooke faces the challenge of rebuilding her life after her unfaithful husband is killed in an auto accident. With most of her money gone, she takes her five-year-old son to Hilton Head Island—to a cottage almost as broken down as her life. When carpenter Jake Randolph offers to help, Brooke immediately distrusts him, but as the months pass he begins to melt the emotional ice around her heart. Then Jake reveals he’s concealing a secret past and Brooke’s hope of a brighter future is destroyed. Or is there a rainbow beyond the storms of heartbreak?

In Smoky Mountain Sunrise, Ramona Martin agrees to be dashing Andre Doudet’s girl for a summer in the incomparable Smoky Mountains. What possible harm could it do? But when she finds herself caught in a web of deceit, Ramona finds herself face-to-face with some of the most challenging  tests of her life—as an athlete, as a woman in love, as a Christian. Is posing as Andre’s girlfriend a game worth winning?

Prolific author Yvonne Lehman (1936 – 2021) founded and directed the Blue Ridge Mountains Christian Writers Conference for twenty-five years. During her career, she authored, compiled, or edited 59 novels and 16 nonfiction books including those in the Divine Moments series.

Lori Marett, daughter of Yvonne Lehman, has enjoyed success in the world of screenplay writing, articles, and short stories. She and husband, Rodney, directed the Gideon Media Arts Conference & Film Festival for several years and currently helms the Faith in Film Conference in Nashville, Tennessee. Lori has written a novel, several nonfiction books, and currently has scripts under consideration by movie and animation production studios.

Eva Marie Everson is a multiple-award winning author and speaker who hails from the picturesque Southern town of Sylvania, Georgia. She is president of Word Weavers International, as well as the director of Florida Christian Writers Conference. She enjoys coaching new authors through her company, Pen in Hand. Eva Marie and her husband make their home in Central Florida. They are the parents of three fabulous children who have blessed them with the world’s greatest grandchildren.

ROMANCING THE SOUTH: Finding Love in the Carolinas is published by Iron Stream Media and is now available at all major book retailers and online.

About Yvonne Lehman
The late Yvonne Lehman authored more than 70 books throughout her career. She founded and directed the Blue Ridge Mountain Christian Writers Conference and was beloved worldwide.