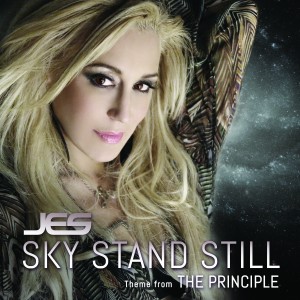 The theme song from The Principle, titled SKY STAND STILL, is co-written and performed by 2016 GRAMMY® Nominee artist JES and Hero Delano.  JES is the singer-songwriter known for her work as the featured vocalist on tracks with Tiesto, BT, Paul Oakenfold and more.

The lyric video for the song was debuted by BUZZNET and can now be viewed at https://youtu.be/ikOaq4BhCaI.

“My main goal for a song is always finding that emotional connection with the audience. I wanted the words to mean something universally and make the melody beautiful so it touches the listener and leaves them feeling something. When writing for a musical theme, you have that chance to sum it all up. Music is such an important component to film and I am excited because I think it is a powerful uplifting song that will connect with people and be able to reach a global audience,” says JES.

It is a commonly held belief that leaders are born, not made. If this is true, then JES’ position in the world of music can only be described as her birthright.

Since her legendary release “As The Rush Comes” with Motorcycle redefined the landscape of EDM, JES has propelled an unending stream of solo hit songs and collaborations with a who’s who of the world’s most prominent DJ’s including Tiesto, Armin Van Buuren, Paul Oakenfold, Above & Beyond, Kaskade, BT, Richard Durand, Cosmic Gate and Roger Shah.

JES has collected awards from the prestigious International Dance Music Awards at Miami’s WMC, The ISC (International Songwriting Competition ‘08’ 09 and ‘10) and topped Billboard’s “Most Played Dance Songs of the Decade” chart (2000-2010). Her tours have touched the shores of 6 continents with landmark shows at international events such as the Beijing Summer Olympics.

Always seeking out a new path, JES added DJ’ing to her legendary performances and launched a hit weekly mix show and a comp album franchise to support it. “Unleash The Beat” has enjoyed runaway success syndicating worldwide on over 70 stations. Dj’ing has also become a central part of JES’ live show where she mixes while she sings, once again leading a new revolution in EDM performance culture.

Since being signed by Tiesto to his (then) own label “Black Hole Recordings / Magik Muzik” in 2007 JES’ career has developed at a dizzying pace. Tour performances across the globe with every major club brand combined with collaborative and solo chart and dance floor success have enabled JES to stay one step ahead in a genre that can sometimes seem overcrowded. It is said that if you want to know the future then look to the stars. In this case, it would seem, never was a truer word spoken.

The song is available for purchase through ITUNES:  http://bit.ly/SkyStandStill, AMAZON: http://amzn.to/1nCI0uu, and GOOGLE PLAY: http://bit.ly/1tRlCAu.

For more about this controversial film, visit http://www.ThePrincipleMovie.com, or watch the 20 minute short documenting the science community’s cover up at THOUGHTCRIME.