“God is a Grunt: And More Good News for GIs” will release April 19 from Worthy Books

Logan M. Isaac, veteran, advocate, teacher, and award-winning writer, invites readers of all political and denominational stripes into a more thoughtful conversation and meaningful community with soldiers and veterans. 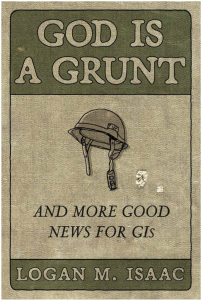 In his honest and vulnerable new book, Logan Isaac offers an opportunity for GIs, veterans, and those close to them to read Christian traditions as a soldier would—by and through the lived experiences of military service.

This well-researched, meditative guide for Christians who have served their country delves deep into the Bible, while Isaac shares his own beliefs and thoughts on the life-altering experiences of battle. He attempts to fill the void most Christians in the military feel by providing theological resources to discern a better way of discipleship for GIs, affirming the nuance and complexity of armed service and the gifts GIs extend to Christians around the world.

If Jesus is God, then God is a grunt—the humble, hardy folk placed at the bottom of the social hierarchy who are relied on to accomplish the dirtiest, most difficult (and most thankless) work.

This is good news for millions of Christian soldiers and veterans in the U.S. because they have had to make an impossible choice, with no perceivable middle ground, between patriot and pacifist.

LOGAN M. ISAAC spent more than six years in the United States Army as an artilleryman, including a deployment in support of Operation Iraqi Freedom in 2004. He was discharged as a Noncommissioned Officer in 2006 and went on to earn a BA from Hawaii Pacific University and a Master of Theological Studies from Duke University. Logan spent a year teaching at Methodist University in North Carolina before leaving to study at the University of St Andrews in Scotland, from which he received a Master of Letters in Systematic and Historical Theology in 2015.

After returning to a teaching position at Duke University, he went on to earn a Certificate in Business Administration from Georgetown University and start Pew Pew HQ, a social enterprise based in the Washington, D.C. metropolitan area. Logan is the sole author, as Logan Mehl-Laituri, of Reborn on the Fourth of July (InterVarsity, 2012) and For God and Country: In That Order (Herald, 2013). His first book received a Publishers Weekly Starred Review and he has served as a consultant or contributing author of nearly twenty additional publications, including books such as The Gospel of Rutba (Orbis, 2012), and Jesus, Bombs, & Ice Cream (Zondervan, 2012). He has been featured on the cover of Christianity TodayMagazine and was awarded an Evangelical Press Association award for Best Article Series for “Ponder Christian Soldiers” in 2016. He lives in Maryland.