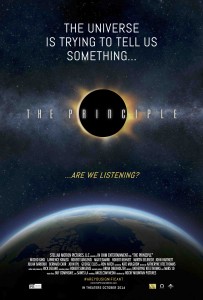 Orange County, CA – FrontGate Media has been selected by Stellar Motion Pictures LLC as the official agency for representation to launch the DVD and Blu-Ray release of their documentary The Principle, written and produced by Rick DeLano, directed by Katheryne “KTEE” Thomas of In Ohm Entertainment, and executive produced by Robert Sungenis.

The award-winning firm will create and execute the PR Campaign, provide Social Marketing coaching, and create the Advertising Placement campaign to reach families, educators, home schoolers and the science community.

According to writer and producer Rick DeLano, “We chose FrontGate because of their highly experienced and coordinated team across PR, Social and Advertising.  With their strong history of working on films, and documentaries in particular, we are excited to have their mind-share.”

“The Principle has revealed surprising results from recent large-scale surveys of our universe. These surveys uncover evidence of the significance of Earth in the cosmos, and question the centuries old belief that the Earth does not have a central position in the universe.” states Scott A. Shuford, Founder & Chief Engagement Officer of FrontGate. “I’m fascinated by the discoveries the filmmakers uncovered, and their questions that have led to such an abrasive response from the science establishment.”

While the film received resistance from the science community, The Principle garnered much attention and support in its limited theatrical engagement, including multi-week runs in Chicago, Los Angeles and San Diego.

About The Principle
The Principle explores the significance of the Earth’s place within the Cosmos. Tracing the development of cosmology from its inception (Stonehenge, the Great Pyramid at Giza), through the great revolution of Copernicus, to the astonishing new discoveries of Earth-oriented alignments in the largest structures of our observable universe, The Principle leads us face-to-face with the question, and the challenge – are we significant within the structure of the Universe, and, if so, why and finally, what does this mean for the future of mankind?  The film will be available to stream, and on DVD and Blu-ray beginning December 8, 2015.  For more information, visit http://www.ThePrincipleMovie.com.

About FrontGate Media
Award-winning FrontGate Media (http://FrontGateMedia.com) is the largest Marketing Service and Web & Events Group reaching the faith and family values audience.  Serving as “Your Gateway To The Christian Audience,” the firm provides Faith-based market Strategy Development, Public Relations, Media Buying, and Social Media Marketing. FrontGate’s own Web & Events Network also provides reach to more than 10 million people and 5 million email subscribers. Founded in 2001, FrontGate has repeatedly been honored in the Internet Advertising Competition and the WebAwards.  The company plays a key role in the success of for-profit and non-profit organizations seeking the faith-based and family friendly audiences.  Current projects include work for Pope Francis’ Wake Up! album, Bible Belles’ Adventures of Rooney Cruz, Open Doors, and more.