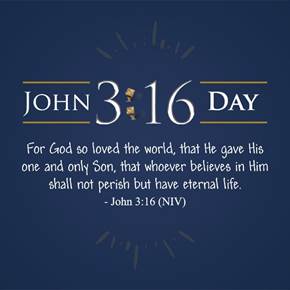 For more than a decade, March 16th has been a day for many Christians to share with people around the world the good news declared in the Bible in John 3:16.

The well-known verse reads, “For God so loved the world that He gave his one and only Son, that whoever believes in Him shall not perish but have eternal life.” (NIV)

The origin of the celebration is unknown, but some media outlets trace it as far back to 2011 when a K-LOVE radio station listener suggested that the day, March 16, should be “John 3:16 Day,” in honor of the biblical verse that affirms the hope we have because of Jesus.

This year, popular Christian websites FaithGateway.com and BibleGateway.com are partnering with the nation’s pastor and New York Times bestselling author Max Lucado, and K-LOVE Radio, to encourage Christians to spread the John 3:16 message by simply posting the verse to social media, texting contacts, or sharing the verse in some creative way!

Max Lucado is also inviting people around the world to join a 3:16 Online Bible Study of the verse starting March 21, 2022. Registration is free and information can be found at faithgateway.com/316 or KLOVE.com.

Lucado’s 3:16 Study is based on his book, 3:16 The Numbers of Hope, which has sold more than one million copies worldwide and translated into 25 languages. The study has been entirely rewritten and re-filmed for 2022 with a more focused and deeply personal study of the most-loved verse in the Bible—John 3:16.

“When 3:16 released in 2007, we had no idea it would be so well received… Numerous bookstores, church denominations, and congregations spent focused time examining this life-giving promise. Prisons. Small groups. Personal studies. Stories came from readers around the world who found faith in this “twenty-six-word parade of hope,” whose words have been framed, T-shirted, tattooed, monogrammed, and bannered,” writes Max Lucado in the book’s introduction.

“Every time I recall these words, they are as fresh and as stunning as my first encounter with them. The mind-bending awareness of God’s limitless love, his incalculable sacrifice, and the priceless teaching at the core. How can we not review it again and again? I want this generation, and all who come after, to look closely at the key promise of God and choose the gift beyond all gifts,” says Lucado.

The Bible verse John 3:16 is the most-searched for Scripture in the Bible of the last decade, according to BibleGateway.com, the most visited Christian website in the world.  In an interview with BibleGateway, Lucado reflected on the importance of the verse in his life:

“John 3:16 has meant a lot to me in my life because it’s so concise. It’s one of those Scriptures that summarizes all the core doctrines of the Christian faith…. Taking a deeper look at John 3:16 allows us to fall in love with it and appreciate how brilliantly these 26-words articulate the big ideas of the Bible. I think that’s why it has meant so much to me all these years.”

“We’re grateful for this opportunity to come alongside Max and help share the truth of John 3:16 with millions throughout the U.S. and around the globe,” said K-LOVE CEO, Bill Reeves.  “Partnering with Max on this study enables us to give our audiences yet another way to go deeper into God’s Word and promises.”

About FaithGateway
FaithGateway™ is an online Christian community dedicated to helping people grow and share their faith and is owned and operated by HarperCollins Christian Publishing.

About K-LOVE
K-LOVE creates compelling media designed to inspire and encourage audiences to have a meaningful relationship with Christ. K-LOVE is listener supported and delivers positive and encouraging music and messages through nearly 600 signals across all 50 states, the K-LOVE App, smart devices, klove.com, and K-LOVE On Demand. For more information on K-LOVE, please visit klove.com.