WESTMONT, IL—InterVarsity Press is pleased to announce that Esau McCaulley, author of Reading While Black, was named the winner of the 2020 Emerging Public Intellectual Award. The award, hosted by Redeemer University and sponsored by Acton Institute, Cardus, the Center for Public Justice, the Council for Christian Colleges and Universities (CCCU), and Henry Institute, is intended to recognize and foster emerging talent, those working in the Christian academy who excel in both academic and public spheres and whose work affects the common good.

“His work is profound and important, provocative, accessible, and of the moment,” said Dr. Stan Rosenberg, vice president for research and scholarship at the CCCU. “He not only challenges his readers to think critically and carefully, he asks the challenging questions in a manner that urges you to think and act together with him and the broader community. His work inspires us to seriously engage ‘Black ecclesial interpretation’ and in doing so reach toward a better Biblical hermeneutic sensitive to a greater depth and variety of cultural manifestations. We can then more honestly and adequately worship and read about the work of God that crosses cultures, deeply incarnates each in particular ways, and builds a bigger picture of God wherein each culture’s insights complement the others.” 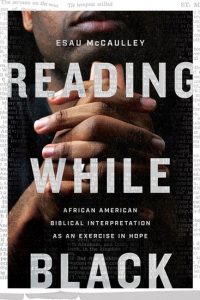 Reading While Black: African American Biblical Interpretation as an Exercise in Hope is a personal and scholarly testament to the power and hope of Black biblical interpretation. Growing up in the American South, McCaulley knew firsthand the ongoing struggle between despair and hope that marks the lives of some in the African American context. A key element in the fight for hope, he discovered, has long been the practice of Bible reading and interpretation that comes out of traditional Black churches. This ecclesial tradition is often disregarded or viewed with suspicion by much of the wider church and academy, but it has something vital to say.

At a time in which some within the African American community are questioning the place of the Christian faith in the struggle for justice, McCaulley, a New Testament scholar, argues that reading Scripture from the perspective of Black church tradition is invaluable for connecting with a rich faith history and addressing the urgent issues of our times. He advocates for a model of interpretation that involves an ongoing conversation between the collective Black experience and the Bible, in which the particular questions coming out of Black communities are given pride of place and the Bible is given space to respond by affirming, challenging, and at times reshaping Black concerns. McCaulley demonstrates this model with studies on how Scripture speaks to topics often overlooked by white interpreters, such as ethnicity, political protest, policing, and slavery.

“When I first met Esau three years ago, I sensed that his voice was an important one,” said Anna Moseley Gissing, associate editor for IVP Academic. “His passion for the Bible and for racial justice were clear from the start, and his vision for highlighting Black ecclesial interpretation was compelling. Since then, many have been attracted to Esau’s serious theological reflection and biblical interpretation combined with his charisma, courage, and authenticity. Reading While Black is resonating with a wide audience, and Esau is indeed emerging as a public theologian.”

Ultimately McCaulley calls the church to a dynamic theological engagement with Scripture, in which Christians of diverse backgrounds dialogue with their own social location as well as the cultures of others. Reading While Black moves the conversation forward.

“This type of interpretation has provided hope because when the enslaved Black and Brown people turned to these texts they discovered in them a God who is a friend and not an enemy,” says McCaulley. “The incarnation, life, death, resurrection and ascension of Christ stand at the center of all my hopes. Hope is not in this passage or that one. The whole of the Bible is bursting with possibility.”

McCaulley (PhD, St. Andrews) is assistant professor of New Testament at Wheaton College, a priest in the Anglican Church in North America, and a contributing opinion writer for the New York Times. He is also the host of The Disrupters podcast. His publications include Sharing in the Son’s Inheritance and numerous articles in outlets such as Christianity Today, The Witness, and the Washington Post. McCaulley is a military spouse and is married to his beautiful wife, Mandy, a pediatrician. Together, they have four wonderful children.

McCaulley aims to point out that everyone comes to Scripture with different life experiences and cultural perspectives. “Black biblical interpretation simply puts a name to a common reality that we are all shaped by our experiences and we bring those experiences to the process of interpretation,” he said. “This does not mean that the text changes in meaning depending on your ethnicity or race. That would be a strange idea! But it does mean that I might have some insights because I came to the text asking a particular set of questions that others might not ask because they didn’t have those experiences. That is also true going the other way. Other cultures might be able to point out my blind spots. The goal is that together we might discern what God would have us do.”

This fall, Redeemer will facilitate discussion groups among students, faculty, and staff about McCaulley’s book and promote book clubs to the larger church community. “We’re looking forward to engaging in conversations about race and diversity from a Reformed Christian perspective and we’re excited to be able to use this book as a starting point for discussion,” says Dr. David Zietsma, provost and vice president, academic. “It provides a much-needed Black perspective at this time in history.”

Though McCaulley says his entry into the public square through speaking and writing has been unexpected, he wants people to know that anyone wondering about the church’s message in this moment could benefit from his book. “Although it is focused on the particular questions being raised by the African American community, it is not a book closed off from the rest of the church and the world.”

“I hope that my writing and speaking models a combination of rigorous theological reflection, careful biblical interpretation, and a realistic analysis of the present moment,” McCaulley said. “I hope that people can see that the Scriptures, the church, and most importantly God himself has something to say about every arena of thought and action.”

New Media Idea Book now available with a complete list of books and experts on politics, race, justice and other timely topics.