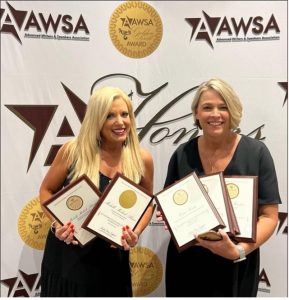 Memphis, TN. August 2022 – It’s one thing for a publisher to release a steady stream of titles in its first year. But for nine authors to place and final in 16 different contests in the publishing industry? Almost unheard of. Enter End Game Press (EGP).

Founder and director of EGP, Victoria Duerstock is excited to see industry recognition for her authors and their work—from board books to adult nonfiction titles—they are all winning accolades.

Michelle Medlock Adams, author of more than 100 books, placed and finaled in 13 different contests with her first EGP title, Dachshund Through The Snow. That picture book, which features a heartwarming story about a little dog with a big heart and fabulous illustrations from Ana Sebastian, has earned 10 first place awards, five second places, and two Book of the Year honors since its release less than a year ago.

“We are so pleased to see our first books continuing to win awards and recognition in the marketplace both for their design and content,” Duerstock shared in a social media post. “Thank you for supporting us as we work to create beautiful books that will make an impact out into the marketplace.”

End Game Press continues to work hard to produce beautiful, meaningful books. By the end of 2023, EGP will have 45 books in the marketplace. Duerstock is hopeful that all future titles will also win awards, but more than anything, she is determined to publish books that make a great, positive impact in the world today.