Beloved worship leader shares God’s faithfulness in tragedy and the inspiration for his new book, ‘God Will Make a Way’, releasing Oct. 16 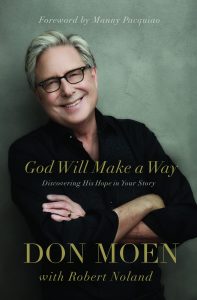 NASHVILLE, August 3, 2018 — Emanate Books, an imprint of Thomas Nelson, announced today the forthcoming publication of God Will Make a Way: Discovering His Hope in Your Story (October 16, 2018) by Don Moen, an internationally renowned, multi award-winning worship artist and writer whose albums have sold more than 5 million units.

Written with prominent biographer Robert Noland and featuring a foreword from World Champion Boxer Manny Pacquiao, God Will Make a Way shares the story behind the award-winning hallmark song of Moen’s career, and encourages readers to rest in the fact that God is always working, though often in ways we cannot see. Moen knows first-hand and wants others to know that no matter how dire the circumstances, God does not forget his children.

“As I’ve traveled around the world, I’ve seen God work in countless ways, bringing hope to people who have lost hope. I have seen Him make a way where there seemed to be no way, and I’m excited to share many of these stories in my new book,” said Moen.

“We are absolutely honored to partner with Don on his first, groundbreaking book God Will Make a Way,” said Joel Kneedler, publisher of Emanate Books. “His fans will immediately recognize Don’s heart in the pages of this book. He is the ultimate encourager and storyteller.”

Through personal stories and encouraging Scripture, Don provides comfort to those struggling with doubt. He reminds readers that the same God who parted the Red Sea, saving Moses and the children of Israel, is the same God we know and serve today.

“Don Moen is one of those iconic artists who never seems to age. I’m excited to see how this book will encourage his fans during these troubled times,” said Danny McGuffey of Iconic Media Brands.

Don Moen, a pioneer of the modern Praise and Worship movement, has spent his career as a worship leader, producer, songwriter, and music executive. While a student at Oral Roberts University in the early 70s, Moen began touring with the musical group Living Sound and evangelist Terry Law. By 1986, Moen had recorded “Give Thanks” for the Hosanna Music! praise and worship series at Integrity Music, where he would serve as creative director, executive producer, and eventually, president of the label. During his tenure there, he sold more than 5 million units and signed worship leaders and songwriters, such as Paul Baloche, Ron Kenoly, Darlene Zschech, and many more. Today, Moen lives in Nashville, Tenn., with his wife, Laura, where he is president of Don Moen Productions and oversees his international nonprofit ministry, Worship in Action.

Emanate Books is where the Spirit meets the word. This Thomas Nelson imprint publishes and promotes content for the ever-growing nondenominational, charismatic community. Authors at Emanate have a passion for Jesus, an abiding trust in the veracity of the Scriptures, and believe in the present-day work of the Holy Spirit.