Dr. Tony Evans partners with LifeWay Films to bring message of true manhood to movie theaters through
Fathom Events April 29 and 30 only 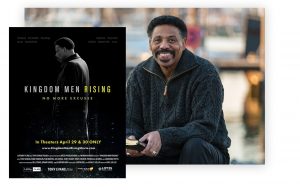 “We as men have to understand while we’re waiting on God, God’s waiting on us. He’s waiting on us to step up and become men of faith…who not only believe in God, but believe God. Men who act like God is telling the truth and who walk by faith not just talk by faith,” said Dr. Evans. “There’s a difference between being a man and being a male. You can be one without the other because you’re not taking responsibility under God. So it is absolutely critical that we own this. We own the responsibility of calling a culture in decline back, calling men back.”

Through the stories of the men cited above, and others, KINGDOM MEN RISING explores God’s ultimate purpose for masculinity and provides an honest portrayal of today’s man that is countered by God’s original design.

The powerful documentary will explore what it means to be a real man in a modern age, addressing many of the unique circumstances facing men today. Drawing from his own experiences and using a biblical perspective, Dr. Evans addresses the topics of significance, priorities, race and passivity, challenging men to step more actively into their purpose – no more sitting on the sidelines, no more excuses.

“KINGDOM MEN RISING presents a unique and powerful opportunity for churches and ministries to bring men together for a life-changing experience,” said LifeWay Films’ Trent Myers. “Through their Fathom Affinity Network, Fathom gives churches the option to host screenings at local movie theaters or in their own churches, offering new possibilities for men’s outreach that we’ve never seen before.”

About Dr. Tony Evans
Dr. Tony Evans is the founder and senior pastor of Oak Cliff Bible Fellowship in Dallas, founder and president of The Urban Alternative, chaplain of the NBA’s Dallas Mavericks, and author of over 100 books, booklets and Bible studies. The first African American to earn a doctorate of theology from Dallas Theological Seminary, he has been named one of the 12 Most Effective Preachers in the English-Speaking World by Baylor University. Dr. Evans holds the honor of writing and publishing the first full-Bible commentary and study Bible by an African American. His radio broadcast, The Alternative with Dr. Tony Evans, can be heard on more than 1,300 US outlets daily and in more than 130 countries.  Dr. Evans launched the Tony Evans Training Center in 2017, an online learning platform providing quality seminary-style courses for a fraction of the cost to any person in any place. The goal is to increase Bible literacy not only in lay people but also in those Christian leaders who cannot afford nor find the time for formal ongoing education. For more information, visit TonyEvans.org.

About Tony Evans Films
Tony Evans Films ushers in positive life change through compelling video-shorts, animation and film. We seek to build kingdom disciples through the power of story. We use a variety of platforms for viewer consumption and have over 25,000,000 digital views. We are launching the distribution of our films through movie theaters in 2019. We also merge video-shorts and film with relevant Bible Study materials to bring people to the saving knowledge of Jesus Christ and to strengthen the body of Christ worldwide. We aim to expand viewership and participation through demonstrable market strategies. TUA’s mission is to serve as a teaching, training and resource ministry in order to restore hope and transform individuals, families, churches and communities through the proclamation and application of the Word of God.

About LifeWay Films
LifeWay Christian Resources is one of the world’s largest providers of Christian resources. LifeWay Films exist to empower churches and Christians to engage faith-based films as a tool for discipleship and growing in their faith.