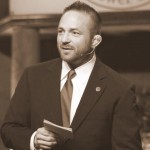 Los Angeles, CA – This Sunday, November 9th, The Assembly in Broken Arrow will host a very special Veterans Day Service, featuring Dr. Chad Robichaux, Medal of Valor recipient, ordained minister and former MMA World Champion. Services will be held at 9am and 10:45am.

At each service, Chad will be sharing his personal testimony of surviving PTSD, as well as giving a message of hope to those who suffer from this condition. He will also be giving an update on Marine Sgt. Andrew Tahmooressi, who was recently released from a Mexican prison after a seven-month detention following a driving error. Chad and Serving California worked on the frontlines, supporting Tahmooressi and his family legally, emotionally and spiritually.

A special offering will be taken at each service to support Mighty Oaks and Serving California.

Chad served eight tours of duty as a US Special Operations Force Recon Marine and Medal of Valor recipient. After returning home, he and his family struggled for years, recovering from his own battle with PTSD. Since his recovery, Chad has earned his PhD and MBA from New York Tech and is a Board Certified Pastoral Counselor with a specialty in the treatment of PTSD.  A World Champion MMA Fighter and best-selling author, Chad now uses his influence to help give hope and healing to warriors and their families struggling with PTSD.

Chad now serves as the Executive Director of Serving California’s Mighty Oaks Warrior Program, which operates on a standing commitment to aid those suffering from Post Traumatic Stress Disorder, with a specific calling to assist America’s active duty service members, veterans and their families.  The program reaches out to communities across the nation and communicates directly with the United States Armed Forces to ensure that our brave soldiers receive the opportunity to participate in their Fight Club, family camps, marriage retreats and vocational programs.  The Fight Club program has been in operation for three years and proudly states that not one of their Alumni has succumbed to the horrific national veteran suicide statistic of 23 per day.

Serving California is a foundation committed to the possibility that we can build a community of empathy for those who are struggling and provide them with needed resources to transcend their current situations.  Their programs place a special emphasis on ex-offenders, crime victims and veterans and their families.

The Assembly is located at 3500 West New Orleans, Broken Arrow, OK. Chad Robichaux will speak at both services on November 9. Services times are 9am and 10:45am.

Chad served America as a prestigious US Special Operations Force Recon Marine, and is now one of the US Military’s top resources in re-integrating returning combat veterans into society.  Chad has earned a PhD and MBA from New York Tech and is a Board Certified Pastoral Counselor with a specialty in Post Traumatic Stress Disorder (PTSD) by the BCPPC and AACC.  After serving 8 tours in the Afghanistan War on Terror, Chad and his family spent years recovering from their own battles with PTSD, now sharing a story of moving from tragedy to triumph over the issues that many warriors and their families face when they return home.  Chad now dedicates his life to share that story and to mentor other veterans like him through Serving California’s Veteran Faith-Based Reintegration and Vocational Programs.  In addition to Chad’s military service, he has served our nation as a Federal Special Agent with the US Federal Air Marshal Service, operated for the Department of Defense (DoD) Special Operations Command (SOCOM), and was a Senior Program Manager for the US State Department in the elite International Surveillance Detection Program. Chad is a Medal of Valor Recipient for his bravery beyond the call of duty in law enforcement, a Best Selling Author and has had a successful stint as a Professional Mixed Martial Arts Fighter.