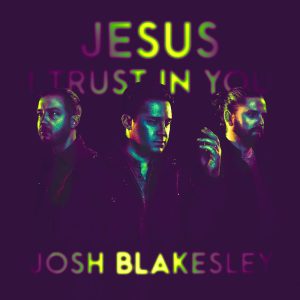 March 25, 2022 (Los Angeles, CA)– OCP recording artist Josh Blakesley has unleashed his second single of the year titled, “Jesus I Trust In You” as a part of a series of singles being released throughout the year called Outpoured.  In support of the new song, New Release Today hosted the exclusive premiere of the official music video. Watch it here.

“When we say ‘Jesus, I trust in you’, we’re not only expressing our faith in God, we’re making ourselves vessels open to all that God has for us,” says Blakesley.  “The divine mercy of Jesus pours out of his heart and cleanses us from our deepest sorrows. In suffering, it can be difficult to see, and even more difficult to accept, but when we trust in Him, we are made witnesses to his compassion – his deep and unconditional love for us. ‘Jesus, I Trust In You’ is a song about God’s mercy flowing out to His people offering peace and healing for all.”

The music video was shot on the outskirts of Houston, TX at St. Anthony of Padua Catholic Church, where Blakesley currently serves as the Music Ministry Coordinator. He then recruited video producer/director JW Beatovich to work alongside him on this project.

When speaking about the video, Beatovich says, “So much worship music is written for in-person experiences – Mass, prayer services, retreats, etc. We really wanted that in-person experience to come through in this video. Once everyone was in place, we just asked them to pray through the song and ignore the cameras. I hope that people who watch it can enter the prayer like we did.”

“Jesus I Trust In You” is a follow up release to his previous single “Come to the Banquet” which expounds on the beauty of God’s love. He has released several projects that have debuted on top 20 on iTunes Christian Charts. His debut album was titled Immersed, and his most recent album, Even in This, features songs co-written by Michael Farren, Mia Fieldes, Marc Byrd and Sarah Hart.

This year, OCP celebrates its 100th anniversary. Founded in 1922 as the Catholic Truth Society of Oregon, we started by publishing apologetic pamphlets to counter the anti-Catholic misinformation and persecution rampant at the time. Later, we published My Sunday Missal booklets to help people participate more fully in the liturgy, a full three decades before the Second Vatican Council. By the later part of the 20th Century, OCP grew from an informative service organization to one of the most trusted publishers of Catholic music and liturgical resources in the world. With 100 years of experience, OCP is equipped and ready to respond to the needs of today’s pastoral musicians and worshiping communities.

Josh Blakesley believes he has a calling to make music that moves people into prayer and action. In 2003, Josh released his first solo album, Immersed, which included “The Lord Is My Shepherd” and the popular anthem “Our God Is Good.” Immersed, released in 2003, was followed a series of albums including, Waiting (2006),  Free (2010),  You Are the Light (2012), which debuting at #16 on iTunes ® Christian and Gospel charts, Even in This (2015) and Mass of Restoration (2017). Recently, he launched a new, on-demand video worship series, The Way with speaker and author Paul George. The Way is a unique series of 10 worship night-style videos promoting introspection, thoughtful prayer and a strong relationship with Jesus Christ.

He travels widely giving concerts at parishes, speaking at youth rallies and leading praise and worship at retreats. He is a veteran of many major events, including World Youth Day, NCYC, NCCYM, Steubenville Youth Conferences and more. Josh is currently the Music Ministry Coordinator for St. Anthony of Padua Catholic Church outside Houston, Texas, where he lives with his wife, Heather Blakesley, and their two children, Sophie and Sutton.

Connect with Josh Blakesley at: