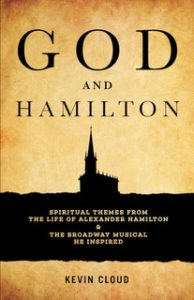 Sisters, Oregon (June 1, 2018) — Many audience members leave Hamilton: An American Musical feeling they experienced something spiritual. This may be in part due to the transcendent nature of theatre, but it’s also due to the spiritual themes of Alexander Hamilton’s life. Kansas pastor Kevin Cloud explores these themes in his new book God and Hamilton: Spiritual Themes from the Life of Alexander Hamilton & the Broadway Musical He Inspired.

Cloud, like many, was deeply moved when he saw Hamilton on Broadway in the fall of 2016. “The night I saw the show, I found myself unexpectedly drawn into the presence of God,” he writes in God and Hamilton’s introduction. He went home and read Ron Chernow’s biography of Alexander Hamilton. As he read, he continued to note and reflect on the spiritual themes of Hamilton’s life—the same themes he noticed in his own life and in Scripture. These reflections provided the basis of his book.

God and Hamilton’s twelve chapters focus on topics such as grace, equality, despair, and redemption. Details from the musical, both on the stage and behind the scenes, naturally spur further Scripture-based discussion of each theme. Mike Breen, author of Building a Discipling Culture, Covenant and Kingdom, and Family on Mission, praises God and Hamilton, saying, “Kevin portrays a wonderful example of how you can draw from contemporary culture to understand how God works with us on our own heroic journeys. I found his emphasis on God’s grace and faithfulness particularly inspiring and think that all who read it will come away with a better understanding of the challenges we all face. I cannot recommend it more highly!”

KEVIN CLOUD has always seen a deep connection between the arts and the spiritual life. He holds a music degree from the University of Kansas and a MDiv from Nazarene Theological Seminary. He currently pastors at Midwest Fellowship in Kansas City, where he lives with his wife, Allison, and their four sons, Samuel, Benjamin, Andrew, and Levi. Cloud’s new book, God and Hamilton, is published by Deep River Books and releases on June 7, 2018.

Deep River Books, founded in 2001, has become a leader in innovative publishing solutions for authors, with several books on various best-seller lists. Their unique mentoring approach to full-service partnership publishing has set a standard for excellence in production, marketing, and sales.