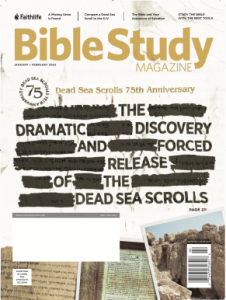 BELLINGHAM, Wash., Jan. 11, 2022 – The newly-released January/February issue of Bible Study Magazine, a product of Faithlife, the maker of Logos Bible Software, honors the 75th anniversary of the discovery of the Dead Sea Scrolls with exclusive articles exploring the history of these ancient documents and how they have shaped modern Bible study.

“Most of the Christian world, it seems to me, has heard of these famous pre-Christian scrolls, discovered in the Judean desert. But the story of their discovery and release is actually more dramatic and interesting than most Christians seem to be aware,” said Mark Ward, editor of Bible Study Magazine. “Through this issue, we wanted to both provide a look at the historical significance of the Dead Sea Scrolls as well as answer questions about their impact on the biblical text.”The 56-page magazine provides rich insight from biblical scholars and pastors on the significance of the scrolls, including a cover story on the young evangelical scholar who in 1947 firmly, but gently, pried off of the scrolls the scholarly locks that had kept them from the world.

Much of the anniversary issue is devoted to examining whether the Dead Sea Scrolls indicate that any corruptions or alterations took place within the text of the Hebrew Bible over the a millennium between Jesus and the earliest full Old Testament scrolls. For this reason, Faithlife asked Old Testament scholars to explain the effect the scrolls have on modern English Bible translations and on our understanding of Scripture today.

One of the most fascinating articles in the issue details a missing verse in the acrostic of Psalm 145, in which each verse begins with the successive letter of the Hebrew alphabet. The “N” of the acrostic is missing in the Masoretic Text, yet when the scroll was discovered in 1956, researchers could confirm for the first time that there was an early Hebrew manuscript that contained the missing verse.

Additionally, Faithlife commissioned a young scholar to review a side-by-side comparison of the Hebrew Bible with the Great Isaiah scroll of Dead Sea Scrolls, specifically identifying in Isaiah 53 any differences from the Masoretic Text that is used for most contemporary Bible translations.

“There are differences, but I think what you’ll find when you look them over is that these differences are not what jump out at you; instead it’s the similarities. Examining word after word and sentence after sentence, we find the two texts exactly the same,” Ward said. “The Bible does not promise perfect manuscript copies of the Bible itself, but we nonetheless have every reason to believe that we possess excellent copies.”

About Bible Study Magazine
Bible Study Magazine is dedicated to helping readers study the Bible with the best tools; it also provides insights from respected Bible teachers, professors, historians, and archaeologists. A non-denominational publication, Bible Study Magazine is a product of Faithlife, which has been using technology to equip the Church to grow in the light of the Bible for 30 years. Faithlife, makers of Logos Bible Software, offers a full suite of church management tools, academic study resources, and smart digital books—all part of its integrated ministry platform that automates tasks and simplifies workflows. For more information, visit Faithlife.com.

EDITOR’S NOTE: To receive a digital copy of the January/February Issue of Bible Study Magazine or to interview Editor Mark Ward, contact Landry Leatherwood at landry@alarryross.com or 972-267-1111.