The highly-anticipated “Adorning the Dark” is both a memoir of Peterson’s journey and an encouragement for artists, written in the hope that his story will provide practical tools to others stumbling along in pursuit of a calling to adorn the dark with the light of Christ.

The book has gained heavy media attention thus far, including “Christianity Today,” “The 700 Club,” The Gospel Coalition, Moody Radio and “That Sounds Fun with Annie F. Downs,” while Peterson is also completing a podcast tour. B&H is promoting a presale campaign offering an exclusive new song from Andrew Peterson for anyone who preorders the book and redeems at AdorningtheDark.com.

Over the last 20 years, Peterson has performed thousands of concerts, published four novels, released ten albums, taught college and seminary classes on writing, founded a nonprofit ministry for Christians in the arts and executive-produced a film, all in a belief that “God calls us to proclaim the gospel and the coming kingdom using whatever gifts are at our disposal.” In 2008, Peterson founded a ministry called The Rabbit Room, which led to a yearly conference, countless concerts and symposiums, and Rabbit Room Press, which has published 30 books to date.

“Adorning the Dark” deals first-hand with the intersection of songwriting, storytelling and vocation, along with nuts-and-bolts exploration of the great mystery of creativity. Peterson describes six principles for the writing life: serving the work, serving the audience, selectivity, discernment, discipline and community. Through stories from his journey, he shows how these principles are not merely helpful for writers and artists, but they are for anyone interested in imitating the way the Creator interacts with his creation.

“Twenty-five years ago I asked God to let me sing and write about him. I’m so grateful that he said yes,” Peterson said. “I started this book when I was in the thick of a new record and kept up with it for a few years, hoping that somehow this glimpse into the creative process would encourage others in whatever creative field they’re in—whether they’re songwriters or painters, parents or pastors. All of us are image-bearers, called to speak light into the darkness. It’s my prayer that whoever reads this book, whatever their gifting, would discover a fresh passion to cultivate, beautify and illuminate their corner of creation for God’s glory.”

Peterson is the author of the award-winning, bestselling series for young readers, “The Wingfeather Saga,”a four-part fantasy-adventure that was later adapted into a short film. The second book in the series, “North! Or Be Eaten” (2009) won the Christy Award for Young Adult Fiction, and the fourth, “The Warden and the Wolf King” (2014) won Children’s Book of the Year in 2015 from “WORLD Magazine.”

“Andrew Peterson’s musical influence on the church has been one of lyrics that stir the spirit God placed in each of us to long for more. We don’t have to set aside our reality to worship through Andrew’s music. In fact, it’s through our reality that God has used Andrew to stir our hearts to a place of understanding God more fully and worshiping him more deeply,” said Jennifer Lyell, V.P. of Book Publishing and Merchandising, B&H Publishing.

“Now, in ‘Adorning the Dark,’ Andrew brings that same giftedness to book form, taking us from the place of broken sinners yearning to make a difference to redeemed sinners able to create for the glory of God and the good of his bride. We are thrilled to be the publisher with the honor of stewarding this unparalleled, important work.”

In addition to his new book, Peterson is set to release “Behold the Lamb of God: The True Tall Tale of the Coming of Christ” Oct. 25, a completely re-recorded version of his acclaimed, bestselling Christmas album released in 2004. Reuniting many of the original cast of musicians that recorded the first album, including Andy Gullahorn, Andrew Osenga, Jill Phillips, Gabe Scott and Ben Shive, Peterson and team re-crafted the original album’s 12 songs, including fan favorites such as “Labor of Love,” “Matthew’s Begats” and “Deliver Us.” The new album also celebrates the 20th anniversary of Peterson’s annual Christmas tour that has become a cherished holiday tradition for churches and families who pack venues each year. 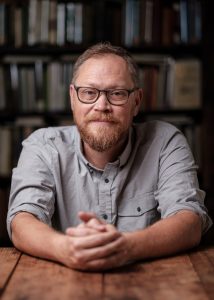 Andrew Peterson is an award-winning singer-songwriter and author. The second book in his Wingfeather Saga, “North! Or Be Eaten” (2009) won the Christy Award for Young Adult Fiction, and the fourth, “The Warden and the Wolf King” (2014) won Children’s Book of the Year in 2015 from “WORLD Magazine.”

In 2008, driven by a desire to cultivate a strong Christian arts community, Andrew founded a ministry called The Rabbit Room, which led to a yearly conference, countless concerts and symposiums, and Rabbit Room Press, which has published 30 books to date.

He’s been married for 24 years to his wife Jamie, with whom they have three children. His eldest is an animation student at Lipscomb University, his second son is a touring drummer and record producer and his daughter recently released her first album. In his spare time Andrew keeps bees, builds dry stack stone walls, gardens, draws and sleeps.