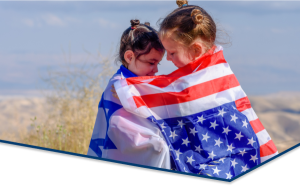 Last month, Pew Research Center released a thought-provoking survey about the improvement of American views on Israel. Between 2019 and 2022, the U.S public’s favorable opinion toward Israelis improved from 64% to 67%.

The survey of 10,441 U.S adults revealed significant differences in public opinion depending on age and political affiliation. 68% of Americans between 50-64 express warm views towards Israelis, while only 56% of adults under 30 have a favorable opinion of Israelis. Unsurprisingly, Republicans hold the People of Israel (78%) in higher regard than Democrats (60%).

Last but not least, the study reported that 86% of Evangelicals have favorable views of Israelis, and 70% believe that God gave the Land of Israel to the Jews.

These findings come as no surprise to us at FrontGate Media, where we work hand in hand with our media partner Israel365  Media reaching Christian Zionists who support Israel and its people from the bottom of their hearts.

Our devoted audience is constantly looking for new ways to support Israel. Your business or organization can be next.