The Washington Times is a trusted source of news for millions and through its special faith-based sections like the “Power of Prayer”, spotlight on William Wilberforce Weekend, Faith & Work,  and many more, you can target Christian Conservatives with the resources and desire to support your cause, product launch, newest release, or event. 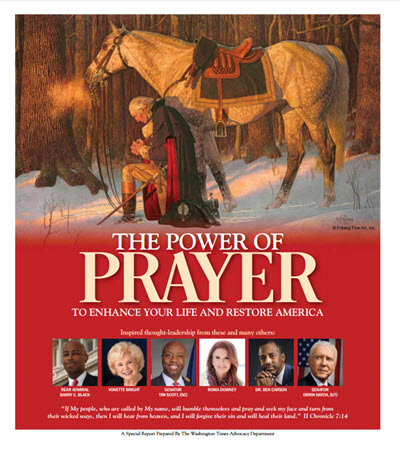 What’s so special
about special sections?

Special Sections reach an extensive and targeted audience of political leaders and action-oriented newsreaders, offering amazing opportunities to connect for those who are featured in the publication, both in the newspaper and through the website.

The event, which was attended by hundreds of Christian pastors, church-goers and thought leaders, is inspired by 18th-century British parliamentarian and philanthropist William Wilberforce, who is best known for his leadership to abolish human slavery, and his call to Christians to render themselves “active and useful” in social and civic duties.

** May 12 – Multi-page section that explores the world of work and faith (in collaboration with the Institute for Faith, Work & Economics)

Scholars, practitioners and policy experts will comment on Biblical principles in the workplace, and social policies regarding work, prosperity, education and moral business practices. (DEADLINE…Reserve your space by May 5!!!)

** ALERT! The Quarter 2 “Power of Prayer” section has been moved to June 23
…so there is STILL TIME to be part of this powerful tool that reaches millions of readers!

To view one of past special sections, click here.

Ad packages are available NOW and deadlines are approaching!